Helping single millennials transition into adulthood by empowering, encouraging and educating them with resources 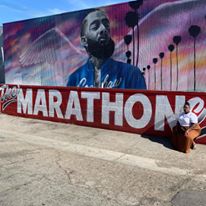 If you don’t know then now you do LA is my favorite city the weather, the atmosphere everything about it just lifts my spirits. I love the freeness of the city. There is always something to do and you are able to network with so many people. No matter if you want to be a star on Hollywood or a comedian at the local comedy clubs. Dreams are achieved in this city!

Are you going to Los Angeles for the weekend? “YES” you say.

Here are your 4 must-see things to do when you visit Los Angeles.

The Shopping center is blocked off but that is where the store “The Marathon Continues” was located and some other stores. ( I can’t remember off the top of my head. Although if you keep driving to the next light you will see a food place called “FATBURGER”. This is known as the Nipsey Hussle Square. Behind the store and on the side of the store there are murals of Nipsey. ( RIP to Nipsey) a year is coming up pretty soon.

FAT burger is still open so you know my family and I had to try it. I honestly never heard of FAT burger before. The food was pretty good and it was created by a black woman but it was owned by Nipsey and his partners.

After this, we went and took pictures in front of the murals that were surrounding the Square.

This is one of the major staples in the city. Lol

Whether you are going to a basketball game or want to take take pictures. There is restaurants over there to eat at, even Shaq has a restaurant. You can just walk around on a nice day and take pictures. Now (RIP Kobe) there are murals of KOBE and Gigi surrounding the area.

I went there literally a week after he passed, so I was able to sign the wall and take pictures of the mural. It was so packed with people, flowers and traffic. So much love was shown to the Bryant family and the other 7 lives that were loss in the accident around the city.

Oh goodness if you don’t do anything else you have to at least go on a tour around Los Angeles. You can see houses, the city and even the Hollywood sign. We went through Beverly Hills and even seen Beyonce and Jay Z their house is amazing. We also saw studios and where they shot some of the best movies. This was a really cool tour to actually ride around and see the city.

I feel that Los Angeles is one of the most inspiring cities people move there to live out there dreams. To go see real people that you look up to have stars in their respective industries had me in awe. There is a whole block of stars and it really never ends. You can start on one side of Hollywood and it just goes continues down the street with names.

I loved my experience in Los Angeles and I can’t wait to go back.

Have you been to Los Angeles? What is your favorite thing to do in the city? If you haven’t gone to Los Angeles are you going now? Thanks for coming to internet home! My name is Alieshia and I am a millennial travel blogger. I encourage millennials to travel no matter what and provide resources for adulting.